The Minister of Finance, Budget and National Planning, Mrs Zainab Ahmed, has warned that Nigeria may go into recession if the coronavirus (COVID-19) pandemic continues for the next couple of months.

She stated this during her appearance on Channels Television’s Politics Today where she gave an update on measures taken to mitigate the effect of coronavirus on the nation’s economy.

“We are hopeful that this pandemic will be limited in time,” the minister said during the interview on Friday.

She added, “If it is an average of three months, we should be able to close the year with positive growth. But if it goes longer than that – six months, one year – we will go into recession.”

According to Ahmed, the Federal and the state governments will struggle in terms of revenue, as long as the crude oil price is as low as $30 and sub-$30 per barrel. 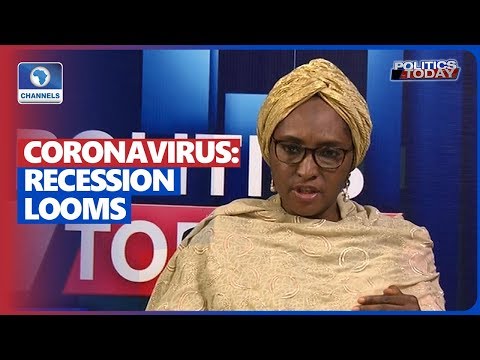 She explained that this was why the government was looking for alternative sources of funding in the form of budget support to boost the economy towards the trying times.

As part of measures to curb the spread of coronavirus and reduce its effect on the economy, the minister noted that President Muhammadu Buhari set up the Presidential Task Force on COVID-19.

She believes the committee, comprising key Ministries, Departments, and Agencies (MDAs) and chaired by the Secretary of the Government of the Federation (SGF), is up to the tasked.

Ahmed also spoke about the recommendations of a former vice president, Atiku Abubakar, to support Nigerians in the course of the pandemic.

Atiku had proposed the distribution of N10,000 to 30 million households as foodstuff supplements, reduction of the petrol pump price, and suspension of stamp duty.

The former vice president had also called for the provision of N1,500 free airtime to 100 million mobile phone lines for emergency calls.

In her response, the minister said the government has noted Atiku’s recommendations but the consequences were being considered.

The government, according to her, is looking at the possibility of giving out stipend and to increase the stipend that it is already giving out to the category of Nigerians that are classified as the poor and vulnerable.

“Health facilities are being upgraded; we have found resources that we can put to also further upgrade. If we don’t respond adequately to the health crisis, the impact on the economy will be worse.”