Arnold Schwarzenegger and Sylvester Stallone used to be at constant war with each other. The two action stars spent all of the 1980s and early 1990s trying to one-up each other and beat each other at the box office. It started to get ridiculous, as Schwarzenegger states in a new interview with Jimmy Kimmel. They had to have the bigger knives, the bigger guns, and even the better muscle definition. These days, the two action stars are good pals, or at least they were. It seems that the Terminator: Dark Fate actor may have opened the feud up once more by talking about a pretty hilarious trick he played on Stallone decades ago.

In the late 1980s and early 1990s, Arnold Schwarzenegger was looking to get into other types of acting roles outside of the action movie realm. This led him to comedy, which turned into box office gold with Kindergarten Cop and Twins. In turn, Sylvester Stallone decided to go into the same kind of thinking because of the rivalry that the two had at the time, so he signed on to star in Stop! Or My Mom Will Shoot. The movie was not even close to a hit. As it turns out, Schwarzenegger was behind the whole thing. He tells Jimmy Kimmel.

“I read the script, and it was a piece of sh*t. Let’s be honest. I say to myself, ‘I’m not going to do this movie…’ Then they went to Sly, and Sly called me (and asked), ‘have they ever talked to you about doing this movie?’ And I said, ‘yes, I was thinking about doing it. This is a really brilliant idea, this movie.’ When he heard that, because he was in competition, he said, ‘Whatever it takes, I’ll do the movie.’ And of course the movie went major into the toilet.”

Stop! Or My Mom Will Shoot was a box office disaster and it set Sylvester Stallone’s career back. Arnold Schwarzenegger laughs about it quite frequently, but it appears that Sly is sick of his former rival bringing it back up in interviews. With the story out in public again, Stallone posted a video message to Schwarzenegger on social media, taking jabs at his career and even threatening to make a new movie called, Stop! Or Your Grandmother Will Beat Your Ass.

Sylvester Stallone goes on to call out Arnold Schwarzenegger for not being a writer, like he is and then told him to “keep punching, big guy,” before wishing him luck on his new “film.” Now, Arnold is out promoting Terminator: Dark Fate at the moment and the two do have a friendly social media rivalry to promote each other’s projects, like Stallone’s latest Rambo: Last Blood. With that being said, they usually mention the name of the project and when it comes out, especially in hashtags and then tell their fans to go see it.

Sylvester Stallone did not mention Terminator: Dark Fate by name and simply captioned his post by saying, “Stop Or Your Grandmother Will Beat Your Ass. – A tribute to Schwarzenegger.” It looks like Arnold may have actually started the feud from the 1980s up again by bringing up the now-infamous Stop! Or My Mon Will Shoot story again. You can watch Sylvester Stallone’s Twitter response to Schwarzenegger below.

“Stop Or Your Grandmother Will Beat Your Ass.”
— A tribute to @Schwarzenegger https://www.instagram.com/p/B4QXCWFJ5LJ/?igshid=j40yyqcex6mk … @jimmykimmel @JimmyKimmelLive 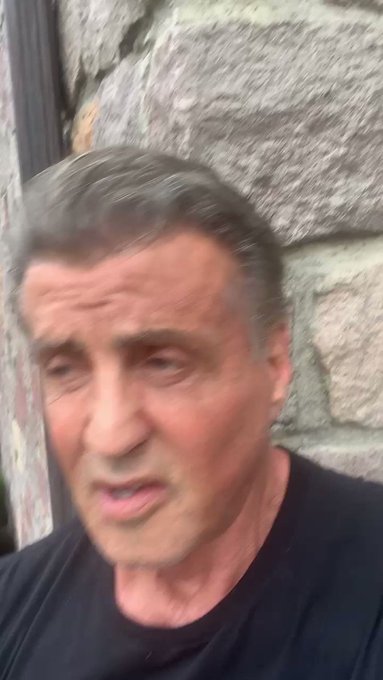 937 people are talking about this