Scientists in New Zealand said Wednesday they’ve found fossilized bones from an extinct monster penguin that was about the size of an adult human and swam the oceans some 60 million years ago.

They said the previously undiscovered species is believed to have stood about 1.6 meters (5 feet 2 inches) tall and weighed up to 80 kilograms (176 pounds). It’s believed to have been one of several species of giant penguins that thrived soon after dinosaurs died out.

The findings were published this week in “Alcheringa: An Australasian Journal of Palaeontology.”

Paul Scofield, a co-author of the paper and senior curator at the Canterbury Museum, said the discovery is significant because the species is similar to another giant penguin found in Antarctica in 2000 and helps show a connection between the two regions during the Paleocene Epoch.

He said that following the extinction of dinosaurs, marine reptiles and gigantic fish, it seemed there was an evolutionary opportunity for penguins to thrive and grow in size.

“The oceans were ripe for the picking with the lack of mega predators,” Scofield said. “It looks like what was going on was that penguins were just starting to exploit that niche.”

But he said the giant penguins themselves became extinct within 30 million years as large marine mammals began ruling the waters. 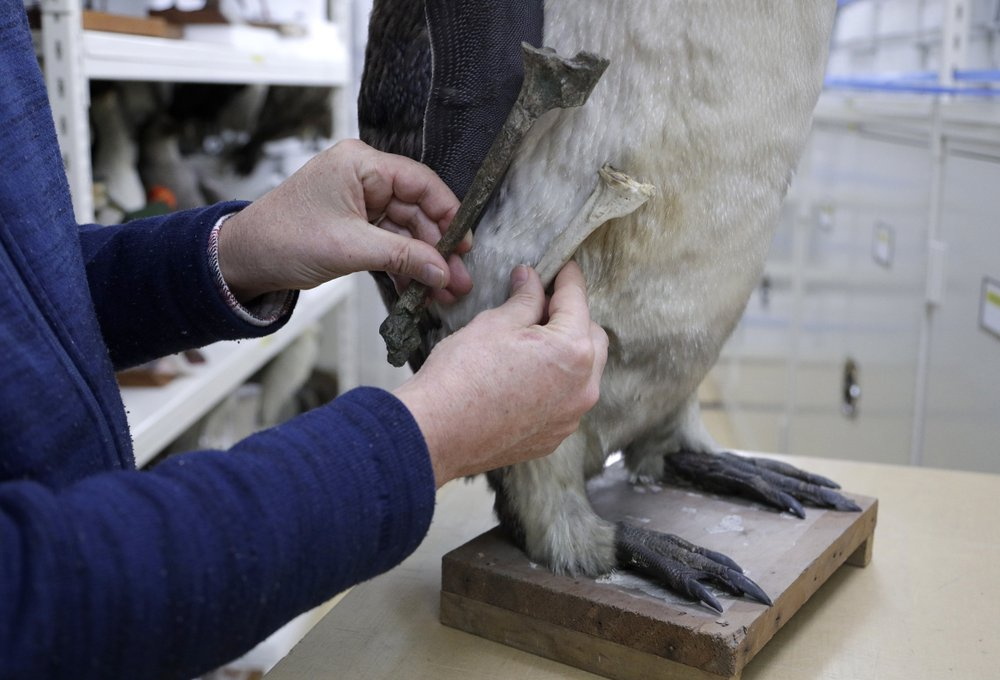 The monster penguins, named Crossvallia waiparensis, would have been about twice the weight and 30 centimeters (1 foot) taller than the largest type of penguins alive today, emperor penguins.

Scofield said the leg bones indicated the monster penguin’s feet may have played a bigger role in swimming than is the case with penguins today.

New Zealand is believed to have been the site of many gigantic birds that later became extinct, including the world’s largest parrot, a giant eagle and an emu-like bird called the moa. Scientists say the lack of predators allowed such birds to thrive.

The monster penguin’s bones, from its legs and feet, were found by amateur enthusiast Leigh Love about 18 months ago in the Waipara River bed near the South Island city of Christchurch. 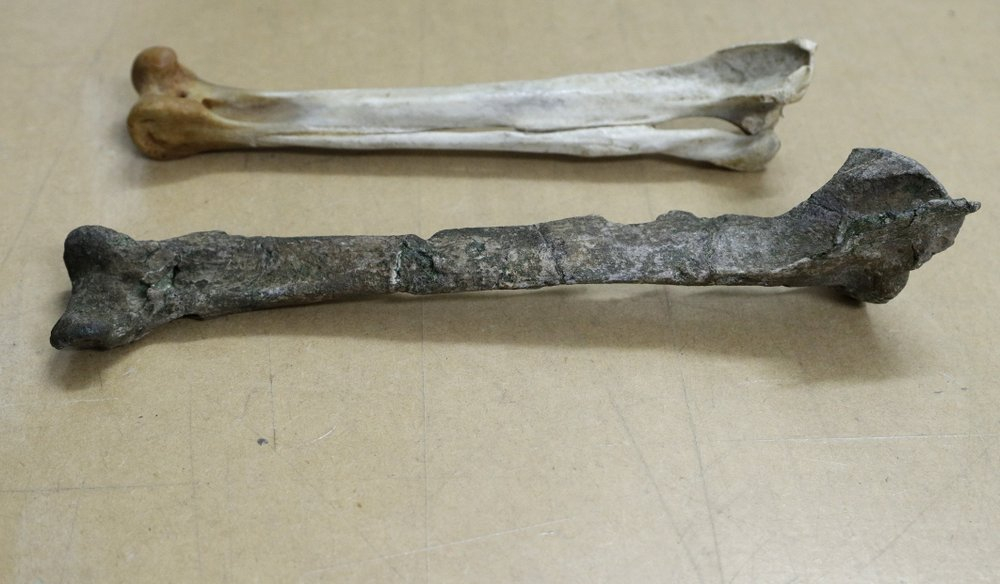 The fossil, a tibiotarsus, bottom, is displayed next to a similar bone for an Emperor Penguin in Christchurch, New Zealand, Aug. 14, 2019. /AP Photo

Love said he spotted the fragments in an eroding bank.

“It wasn’t until I got the fossils home and did a little preparation that I realized I had something completely different than what had been found before,” he said.

Love said his passion for collecting fossils began about 14 years ago after chronic fatigue syndrome prevented him from working for several years.

“It inspires me to go out and look for more,” he said. 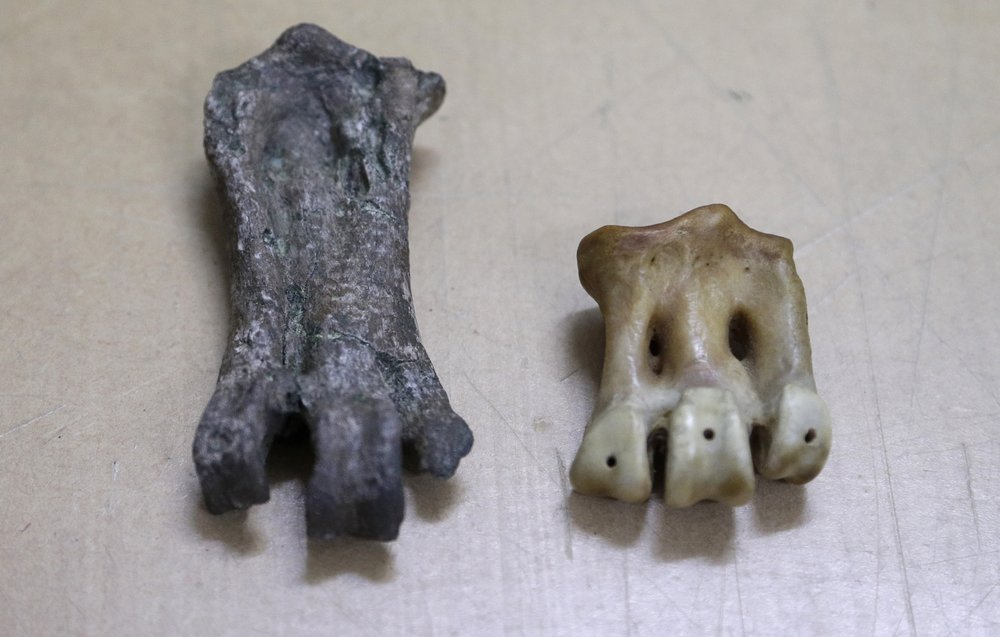 The fossil, a tarsometatarsus, left, is displayed next to a similar bone for an Emperor Penguin in Christchurch, New Zealand, Wednesday, Aug. 14, 2019. /AP Photo

Massey University Professor John Cockrem, a penguin expert who wasn’t involved in the research, said the discovery was significant in adding to knowledge about giant penguins and cementing New Zealand’s place as the penguin center of the world.

Ewan Fordyce, a paleontology professor from the University of Otago who also wasn’t involved in the research, said the penguin was among the oldest ever found. He said one challenge was trying to determine the overall size of the birds from skeleton fragments, but added that it was a challenge everybody in the field faced.

The monster penguin’s bones were analyzed by Scofield and Vanesa De Pietri, another Canterbury Museum curator, along with German paleontologist Gerald Mayr. The scientists say they have discovered other new penguin species at the remarkable site, which they haven’t yet finished researching.

(If you want to contribute and have specific expertise, please contact us at nature@cgtn.com.)

I introduce myself as JOSEPH OLADOKUN, international blogger on NiceNews.com.ng is a digital online Technology posting updating. We specializes in the following news categories: News, Sports, Entertainments, Business, Fashion, Politics, Education, Agriculture, Lifestyle, Health, Technology we can help you promote your offline/online business, start- up, event, website/blog etc to our targeted blog readers and you will get a good value for your money. This is my Contact: nicenews0@gmail.com Joseph Oladokun Blogger (nicenews.com.ng) +234 808 874 8634